Last Friday, the Court of Appeal of Trinidad and Tobago ruled that TSTT was wrong in seeking to declare that it was not a public body, so that it could have avoided having to provide answers to questions raised by citizens, under the Freedom of Information Act. One citizen, Ravi Balgobin Maharaj, had written to TSTT seeking information about taxpayers expenditure. TSTT refused to provide the information, claiming that, it was not a public body, subject to the FOIA. The citizen filed legal action, and won. Unsatisfied, TSTT then appealed the decision. The Court of Appeal, on Friday, has now confirmed what was obvious to the rest of the world, that TSTT is a public body, and must provide answers to the questions raised by citizens of Trinidad and Tobago.

At a time when TSTT is firing workers and claiming financial distress and duress, the Government pursuit of this case demonstrates a clear dictatorial policy of secrecy adopted by the state in the use of taxpayers money.

Who authorised the refusal to provide information to Mr. Balgobin and why? What were they hiding? Who are they protecting?

Having then been sued to provide basic information who decided that it should be taken to court and why? For the record some of the Information being requested included the name and salaries of Executive directors of TSTT and the value of the “Stipend” and other benefits provided to Government appointees on the Board of TSTT.

It is a fact that this matter could not have been pursued in the Court without the Government’s full knowledge. So when did the line Minister Marvin Gonzales learn of this matter and what was his involvement in trying to prevent basic information from being made public. Similarly when did Corporation sole, the Minister of Finance made aware and what was his role in seeking to block access to this use of taxpayers money?

One wonders why they were hiding? Who were they protecting? How much taxpayers money was spent to on this absolutely unnecessary case? Who were the lawyers hired by the State and how much was each paid? How were they selected? What this case demonstrates is the lengths that the Government would go to, to hide information from the public.

But it also demonstrates the lack of accountability of the Minister of Finance and the Minister of Public Utilities in the use of taxpayers money. Sadly, like the situation at NGC where the hundreds of millions have been lost because of illogical decisions of a board selected by this PNM Cabinet, I predict that no one will be held responsible for this waste of taxpayers money and court time by TSTT. No one at TSTT would be held accountable. No government minister would be forced to account.

In fact in both cases, the taxpayer is made to pay millions while the decision makers fatten their bank accounts.

State corruption and wastage of taxpayers money continues directly in the face of the public. And while the squandering of hundreds of millions is being covered up by PNM Ministers, while PNM lawyers eat a food, the pockets and savings of ordinary citizens are being raided by Minister Imbert’s property tax demands.

I wish to commend Mr. Ravi Balgobin Maharaj and his legal team, for their patriotism in seeking answers to questions which should have been answered by the state.

This is not the only instance of corruption, wastage and coverup by the state. Our country’s revenue continues to be used to fund and protect friends, families and financiers of the PNM, while the citizens face poverty, bad roads, rising food prices, flooding, failing access to education and to medical care. People are being fired from jobs they have held for years to pay for these coverups. It is not acceptable at all, that citizens are forced to incur personal expense to take the government to court to get basic answers to how taxpayers money is being spent.

When is Enough, Enough? Stop the corruption. Speak up T&T. Help us save our country.

My name is Dave Tancoo. My email address is oropouchewestmp@gmail.com.

If you see something, say something. Let us together STOP THIS CORRUPT PNM from destroying Trinidad and Tobago. 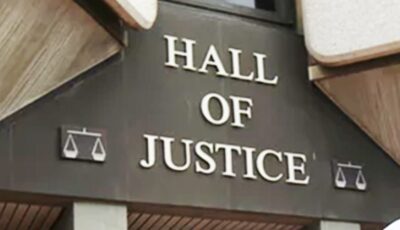