Speaking Notes of the Hon. Kamla Persad-Bissessar, SC at this afternoon’s media briefing

The legal maneuver by the government to let the stay which was previously granted by the court until today May 31st today backfired. Justice Frank Seepersad today instead granted an interim injunction against the Commissioner of Valuations as follows: 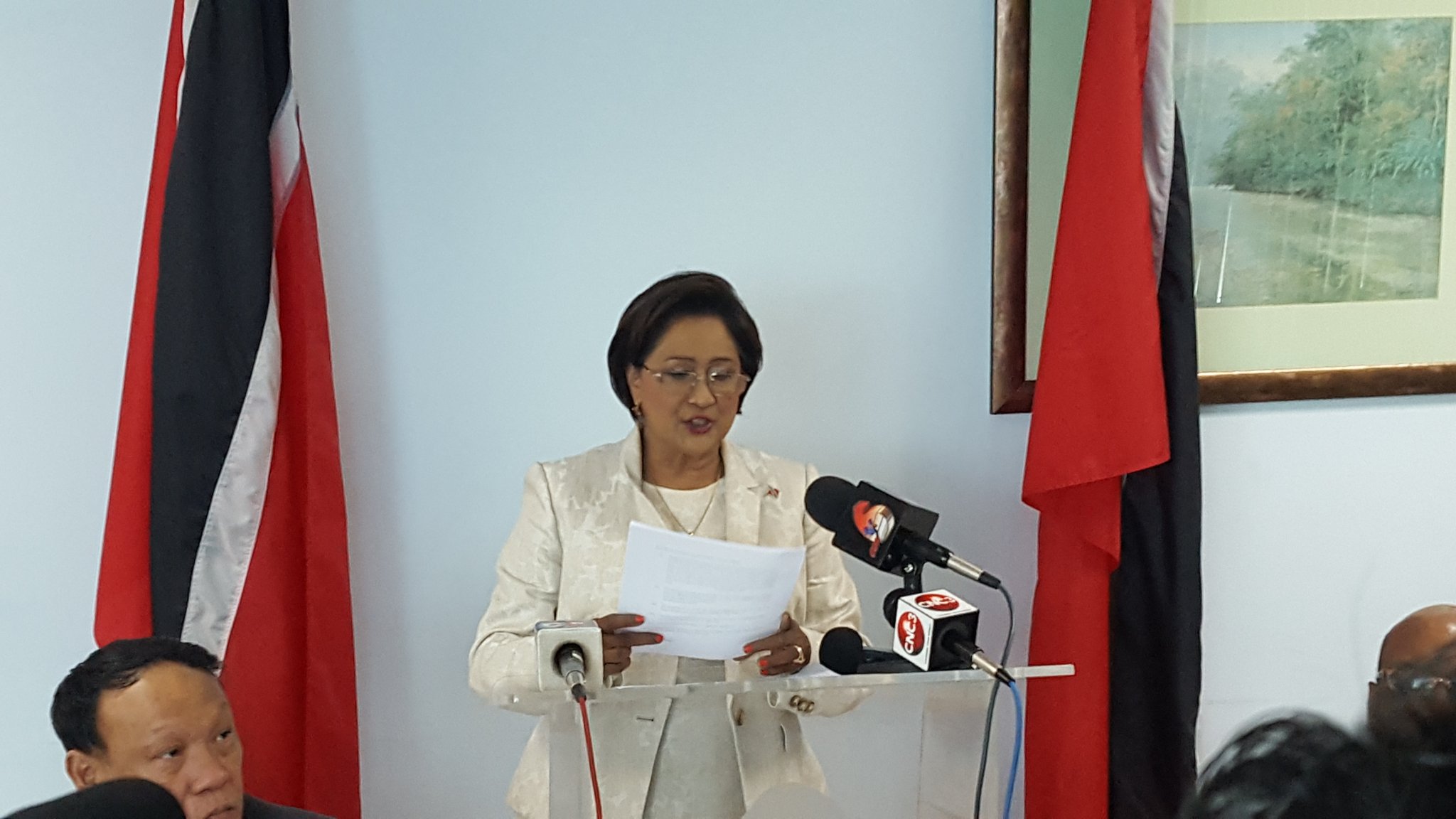 This injunction effectively blocks the State from receiving valuation return forms as well as the supporting documents which the Government mandated citizens to submit to the Commissioner of Valuations until the extended deadline of June 2nd, 2017.

Mr. Imbert had taken the position that the stay imposed by the court on the last occasion that it was open to nevertheless receive the valuation return forms and requested supporting documents such as land survey plan, photographs of the exterior of the property, building plans, town and country approval, completion plan, land survey plan and completion certificate from citizens.

He also claimed citizens voluntarily wished to divulge such personal information with the government. Mr. Imbert further claimed that citizens were happy to pay the property tax as they were lining up in droves, punishing themselves in the hot sun, so that they can comply with the government’s demand.

The stay which was imposed by the court expired today and our legal team led by former Attorney General Anand Ramlogan S.C. made an application for a further protection order in the form of an interim injunction to preserve the status quo. The court in its reasons, the court found that the government was blowing hot and cold on the issue of whether the exercise was a purely voluntary one. At paragraphs 49 and 50, the judge stated,

“As it relates to the issue as to whether or not any sanction could be imposed for the failure to comply with the request to return the Schedule II Return in the format of “DM2”, there is evidence of conflicting positions and based on the interview annexed as “DM8” to the Claimant’s affidavit of May 22, 2017, officials from the Office of the Commissioner of Valuations expressly stated that a fine of $500.00 could be imposed for non-compliance. The position as to the absence of any sanctions with respect to the Schedule II Return is ambiguous and there was no endorsement on “DM2” so as to signal that there was indeed no risk that any sanction would be imposed for the failure to return same.

Given the conflicting positions, it is highly likely that the Claimant at the trial would be able to establish that there was doubt as to whether this process to submit a return was entirely voluntary or whether it was one which was subject to sanction.

50. A legitimate issue has been raised as to whether or not s.6 imposed a continuing obligation or whether any obligation under s. 6(1) ended as at April 1, 2010 and the court is of the view that there is a serious issue with respect to the statutory footing upon which “DM2” was based since there is no indication on same that it was premised upon sections other than s.6 of the Act or that the request was being made in accordance with the Commissioner’s powers under s.5 and s.29 of the Act or in furtherance of any other power with which the Commissioner was vested.”

This judgement vindicates the position we have taken all along in this matter. We see this as an attempt by the government to deceive, trick and hoodwink citizens into sharing their personal information with the government in circumstances where they feel they have no choice except to comply with the government’s demands or else they could face criminal prosecution.

The court noted that the UNC had a high likelihood of success on its claim for judicial review (para 51). The learned Judge found that the government had taken contradictory position and said at paragraphs 53 to 55: “At this stage, the Court does feel with a high degree of assurance that the Claimant would be able to establish at trial that the date expressed at s.6 (1), namely April 1, 2010, should be duly altered by way of legislative amendment. While the Commissioner does have extensive powers under the Act, any attempt to exercise same should be undertaken in a manner that is devoid of ambiguity. Given the contradictory positions that operated, both in relation to the statutory foundation upon which “DM2” was premised, and the issue as to whether any sanction could be imposed for failure to submit same, the court is of the view that such a circumstance can inflict great prejudice on the Claimant and any other person who received such a form and who had to make an election as to whether or not the form should be completed and returned.

54. The completion of the form, the retrieving of “as many as possible” of the documents referred to on “DM2”, and the time apportioned to the process involved in submitting the return, can be viewed as being onerous and time consuming as the process places demands on the citizen’s time. The request, for example, for Building Plans and a Valuation Report may also result in the incurrence of expense.

If a property owner does not have at his/her disposal the said documents and given that the wording of “DM2” is to the effect that the listed documents “should” and not “may” be provided, anyone reading the form and who had no access to the printed or electronic media statements that the obligation to produce same was not mandatory, may have acted under the premise that the documents had to be sent with the return.

55. The response to the pre-action letter advocated that no sanction or penalty would operate in relation to the failure to submit the Schedule II Return, but that position was not clearly communicated prior to May 19, 2017.

The public interest can never therefore be served if persons are inadvertently mislead, duped or coerced into compliance with a request in a circumstance where the possibility of a non-existent threat of sanction may have been the catalyst which caused them to act.

It is therefore likely that many citizens may have complied with the Commissioner’s request to return the Schedule II Return in the format of “DM2” as they may have operated under the misapprehension that a sanction of $500.00 could be imposed upon them if they failed to do so and the court cannot at this stage hold that the Claimant’s concerns, as contained in his affidavit, are frivolous or fundamentally flawed.”

The principle outlined by the court at paragraph 56 is one that every right-thinking citizen will support:

“The prejudice that is likely to be occasioned to the Claimant is not one which can be measured in terms of monetary damages.

In Democratic countries, the dissemination of accurate information is of paramount importance so that people can make informed decisions which are premised upon objective facts in relation to requests that are made under the exercise of a statutory power and the State has an obligation to strictly comply with legislative mandates.”

We take this opportunity to plead with the government to reconsider its position on the property tax.

Hundreds of citizens are now losing their jobs on a weekly basis as evidence by the announcement over the weekend that hundreds were sent home from the OJT office and that GISL will be closed down. The firing of the hundred plus OJT workers would have a domino effect as the OJT program will stagnate and this avenue for employment for young people will dry up.

Apart from rising unemployment, the terrifying and horrible tsunami of crime has left citizens at the mercy of criminals and their savings must be diverted towards protecting their families and putting food on the table instead of filling the government coffers so that they can pay roaming and data charges for ministers and luxurious weekend parties for other ministers while citizens continue to suffer.

Highlight of UNC Political Leader Speech at the MNF May 15, 2017