At the same time the phone lines, mobile, and the water supply were also shut down. This was also a major national security failure. Up till now, the Government of Trinidad and Tobago has not adequately explained the outage.

What could have caused this extended and consequential outage? Is Trinidad and Tobago being dragged back to the stone age because of government’s outsized incompetence, mismanagement and philosophy of no maintenance? Was all of this suffering and inconvenience brought above as a result of natural gas shortages?

During the crisis, we heard not one word from the Prime Minister or any of his Ministers. One very senior cabinet minister, however, was seen buying a power generator for himself at Pricesmart. He was not bothered about the welfare of the citizens that he was elected to serve, only his own comfort and well-being.

The Government itself showed absolutely no concern for the safety and security of citizens. Medicines were put at risk, as well as bodies in the morgues, frozen food stocks and residential appliances.

Traffic was gridlocked as citizens tried to make their way past non-functioning traffic lights, yet no police, no army personnel were called out. At West Mall, it was the windshield-wiping young men that took responsibility and directed traffic.

How much was lost during those 12 hours?

This was the most immediate proof that the PNM is absolutely incapable of running a modern, progressive country. Every single citizen is affected by their careless, heartless, haphazard, reckless and incompetent governance.

Where was Keith Rowley? How can someone as junior, incapable and arrogant as Marvin Gonzales be put in charge of the Public Utilities infrastructure of Trinidad and Tobago?

This echoes the equally inept appointments of the druggist Terrence Deyalsingh as Minister of Health during the country’s worst and most complicated health crisis in our history, or of that repeatedly failed MP Fitzgerald Hinds as head of our national security while we face extremely demanding national and international crises.

These do-nothing, bungling Ministers collect their big salary and lie, lie, lie. They constantly blame the UNC 6 to 11 years ago – sometimes even 25 years ago – for their own incompetence and failure.

Yet the entire country knows that our Public Utilities and infrastructure never ran better, more efficiently, or more equitably, than under our UNC governments – from education, to healthcare, to water distribution, to electricity, to telephone service, to infrastructure.

Under Rowley, we are being taken back to the stone age, back to the days of flambeau and gas lamps.

Our blessed island is being dragged down to the bottom ranks of the Third World under this evil-minded, greedy and corrupt Rowley dictatorship.

The Regulated Industries Commission should order that T&TEC pay all consumers a rebate for this debacle.

The citizens of Trinidad and Tobago also deserve to have a proper government in place running our affairs again.

The PNM must go now. We cannot afford four more years of this backward, flambeau-age government.

Citizens must do all they can to demand that Rowley seek a new mandate or leave office immediately. 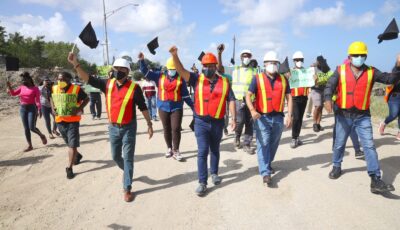 Today there were two protests, one in Mosquito Creek with residents of Fyzabad and La Brea joined by UNC MPs Dr. Roodal Moonilal, Dave Tancoo and