MP Charles has taken note of statements on TV6 this week where Minister Hinds may have inadvertently let slip the true reasons for our disastrous border situation and various security issues – this administration’s unwillingness to verify information and its inexplicable under-resourcing of our TTCG.

This PNM administration’s first instinct, when confronted with uncomfortable information, is to assert that it is false and make excuses instead of carrying out a thorough investigation to verify or refute information presented and then developing a reasonable response.

Without investigating the evidence in the video, Minister Hinds sought to deflect and justify events highlighted by Senator Lyder where Venezuelan fishing boats were seen entering our country unhindered during Monday’s “total lock down” curfew hours. Hinds stated that this was not new or unusual and happens to be a routine occurrence. However, as Minister of National Security, he did not confirm whether these boats in fact entered our borders on that day. And whether they were subject to normal immigration procedures.

How then can he say it was part of normal operations? Was it verified? Where is the documentation from Immigration or Customs or our Coast Guard to confirm the arrival date and time of the Venezuelan vessels seen in the video?

Can this explain why many tens of thousands of illegal immigrants enter our shores undetected? Can it be that our radar detects a pirogue entering our waters and ignores it, thinking it is a fishing vessel on routine business? No verification of assumptions made?

The same arises with the boatload of dead bodies found drifting off Tobago. How did it evade 360 degree radar detection? Was it detected and assumed to be a TT fishing vessel? Did it come via a blind spot in our radar detection capabilities?

Or has the lack of resources for our Coast Guard forced them to make difficult decisions sometimes to ignore the presence of countless vessels which are real or potential threats?

Minister Hinds further sought to insult our intelligence with claims that the two new Cape class Coast Guard vessels will be the panacea for our porous border crisis. Never mind that they are months away from our shores. We are now told that training of crews will begin after their arrival. Ignore the fact that these boats require optimal, timely and costly maintenance for which the TTCG has no known record of excellence.

Minister Hinds must tell us with a straight face whether our borders are locked down as we speak, and more so during the two months we await the 2 Cape Class vessels.

He must tell us whether the 360 degree radar is fully functional.

He must advise how many of the 12 Damen fast patrol and interceptor vessels we left in 2015 are on patrol 24/7.

He must say whether funds which have been allocated in the mid-year budget review are sufficient for the optimal operationalization of our naval assets.

He must inform the population whether the Police Marine branch is fully functional to cover the over 200 illegal points of entry.

What we need is not PR, not fancy language, not excuses, not policy made on flimsy assumptions and seemingly on the fly. What we need is a data driven approach to the management of our porous borders and a Minister who is prepared to level with the population and implement the hard data driven decisions needed to protect our borders. 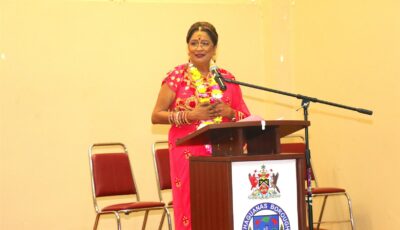 As we observe the 176th anniversary of the arrival of the first East Indian immigrants to Trinidad and Tobago, we are reminded of their courage